A lot of the time many beginner riggers complain that the bad deformations they are getting are down to the model. It is a possibility, but in any case we should examine the models we get before we start rigging them, so we can be relatively sure what we are working with can actually achieve what we want it to. Therefore I’d like to examine what do riggers need from a model.

We will go over the expectations that we should have from a model when we start rigging it. Most of these are really basic and I am sure you know them, but it is important to remember to look for them before we start working on an asset.

Obviously the big one. That is the first thing we were taught at university. It is the base of the technical part of modeling, as our whole production relies on deforming that topology.

What do we need from it then?

In my opinion we can split the most important aspects of the topology to:
– edge flow
– quads
– resolution

First and foremost, the edges should be following the features of the face and body. We will never be able to achieve a decent looking smile shape if the edge flow does not provide us with the circular loops around the mouth and the edges around the nasolabial fold. In beginner projects usually the faces look very very uncanny, and a major contribution to that is the bad edge flow.

What we are looking for in a good edge flow is a nice description of the anatomical structure of the model. We need to be constantly thinking about how would these verts look when we pull them in this or that shape.

Here is a nice example. Notice how the edges flow around the facial features And here is some bad topology. Notice how the edges just create a grid laid over on top of the face. None of them are actually following the shapes. 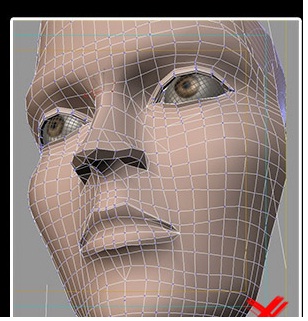 There are a lot of changes of directions of the loops in a good edge flow. These changes usually result in what is called a pole or a star, meaning a vertex which is connected to five other vertices instead of four. Take a look around the eye area of the good example and notice how the circular topology of the eye merges into the mask going around both eyes and eyebrows. This leads us to the next point.

This is the main thing people say when thinking about topology, that the model should consist only of quads. And yeah that is mostly true, but there are plenty of examples of good usage of triangles as well, so if you find that you need to have a triangle, by all means have it, provided that you have done your deformation tests and the triangle does not mess anything up.

That being said, I tend to keep all quads in my models as well.

Now another part of the conversation about quads and triangles is the poles I mentioned above. The thing with the poles is that they distort the quads around it quite a bit, making it easy to get shearing in that area which is a no no. If we are to have a proper edge flow, though, these are inevitable so we should make sure they are positioned at places where they will not have to be deformed a lot relative to their immediate neighbours. In other words, try to put these poles in places where the whole area will move more or less together.

Altogether though, I feel that the importance of all quads have been overstressed, mainly because it is an easy rule to define, and people tend to love having a solid rule to guide them. In this case though, if we really need triangles and we are smart about it there is no problem using them. Just again, make sure they do not get in the way of the deformation. Following the rule about poles – having the whole area move together – should be enough to make them work.

Another big thing with topology is resolution and we as riggers should learn to be very picky about this one, as it is easily adjusted in most cases, but can cause a world of pain when painting weights.

When rigging characters, if there is a problem with the resolution it is usually that is too high. A lot of people would argue that this should not a problem, but I strongly disagree. Yes, there are many workarounds of course, but it is still an issue.

Here are my two reasons for being aware of dense geometries.

They are denser than needed

I am a big proponent of doing everything with a specific purpose in mind, as otherwise you are just bloating your life. If the higher density does not have a specific purpose like fixing texture stretching or adding wrinkles, etc. just lower it. We should not be spending time nor mental resources on stuff we do not need.

Painting weights is a pain

It is tedious and annoying painting weights on very high res meshes. Yes we can get smoother results, but the price you pay is keeping track of much more vertices. Additionally, the brush size needs to be very small in order to paint precisely and that again slows us down. Additionally distributing twist along many edge loops is just a punishment.

Of course there are techniques to overcome these issues, but if we can completely get rid of them, for me that is the better choice. Some of these techniques include, having a lower res geometry which we actually rig and then either copy our skin weights on the higher res one or drive it through a wrap deformer. As for painting smoother weights, we can always create temporary geo, skin that and copy the weights to our models. I often do that for cylindrical parts of the bodies like legs, arms, spines, etc. Getting a nice twist distribution becomes very easy.

Riggers love housekeeping! We love stuff that is clean, elegant and makes sense. Who doesn’t actually? The difference is that we would usually go out of our way to make sure everything in the project is in order. Everything except our My Documents folders I guess.

So what does housekeeping mean in the context of a model?

It is more to do with the actual scene file than with the model, but it boils down to these few points.
– No history (except for the occasional lattice deformer for cartoony eyes)
– No transformations
– Proper normals
– Symmetry (except for cases where asymmetry is intended)
– No purposeless nodes
– Multiple shapes or multiple parents

An obvious one. History makes the scene messy. And we do not like messy. Additionally, it slows down the scene quite a lot, because due to the nature of maya’s dependency graph all nodes that are upstream (are on the input side of a node) need to be evaluated before we evaluate the one we actually need. Considering, it is as easy as Alt + Shift + D, this one should never be a problem.

In some cases history is needed, like for having a character with non spherical eyes.

This is not a deal breaker usually, but can cause issues sometimes, so generally a freeze transformations is considered a good practice. The issues that can be caused are mainly due to the inheritTransforms attribute we sometimes need.

99% of the time this is not a problem for us, but if we use some fancy setups that rely on normals, obviously it is important to have the normals working correctly. Additionally, this is going to be an issue for the further stages of the pipeline, so it is best if we catch it and solve it.

This obviously does not apply to models that are meant to be asymmetrical, in most cases of cartoony characters though, that should not be the case. The only area that might need asymmetrical features would be the face. Apart from that, having everything perfectly symmetrical makes our job much easier. Mirroring joints, skin weights, controls, etc. is a breeze.

This is kind of similar to the No history one, but deleting history does not delete all unused nodes, as they might not be connected to anything. What we could do in cases like that is run the Optimize scene size command, but take a look at the potions and make sure you are not deleting stuff you might actually need. Additionally, we can always script something to clean up our scenes, but if there are native tools to do it, why bother.

With shape nodes, sometimes we might have more than one under a transform, depending on how the modelers arrived to that final shape. If that is the case, it would be best if these are deleted before they are passed to us. That being said, if they are needed for some special purpose, they can be left in there, although that should be kept in mind as there are a lot of scripts out there that grab the first shape of a transform and operate on that.

Additionally, a shape node can have more than one parent – it is instanced. Again, that might be needed for your production, but sometimes modelers forget they have instanced stuff that will need to deform in different ways, which will not work.

I keep reiterating that riggers should make sure rigs can achieve the desired shapes from the pre-production. Just take a look at the model side by side with the pose and expression sheets and think about whether the geometry will be able to support the necessary deformations. I know it is a bit arbitrary, but more often than not just taking a minute to think about that can be really helpful.

And lastly, I know this is a whole essay in itself, but please make sure you ask the modeler for changes nicely. We are all in the same boat together, part of the same pipeline, trying to get the best of our projects. Riggers are known to be kind and considerate and you should do your best to live up to the expectations!